FREE US SHIPPING ON ORDERS OVER $99 Brimming with modern flair and verve, the SUMERAIN shower set transforms any shower into the ultimate personal spa. The comprehensive system comprises of both a shower head and a hand shower. The former is paired with a stainless steel shower arm, and the latter comes with a 59 inches shower hose. The water temperature and volume are controlled through the dual-function valve and trim set, which incorporates a lever handle and a diverter knob. The SUMERAIN shower set with scratch and tarnish-resistant surfaces for a lifetime of beauty, a long-lasting finish that will retain its durability for years to come. Ultra-thin square shower head is made of the highest quality 304 stainless steel, anti-rust. Escutcheon and handles are constructed of metal, ensures durability. 8 Inches Ultra-thin Shower Head
8 Inches ultra-thin shower head with touch clean soft, rubber nubbins that allow you to easily wipe away calcium and lime build-up with the touch of a finger. Keep the flow rate 1.8GPM which will save 30% water. This shower set is built well of very high quality materials and seems to be well designed and thought out. Even the packaging is well thought out. I just finished my installation and it worked out well for me.

Make sure to double and triple check the following and you'll be OK:
1. What's the overall stack-up of the finished wall including any backer board, thinset, and tile? That's very important.
2. In addition what's the depth of the female threads of whatever plumbing hardware you are using for the shower and the wand. The cover plate they provide for the shower has an o-ring and fits snugly unless it's on or near the threads, so if the threads are protruding from the finished wall, the cover plate will be loose. It's probably not a bad idea to get the components you're going to use and assemble them and measure.
3. The instructions provided with the shower set are pretty good, but I think the portion that deals with determining the depth of the mixer valve box relative to the finished wall are confusing. It is simple: you want the some portion of the plastic box sticking out of the finished wall so you can trim it flush when you're done with tile. It's easy enough to figure that out, but I'd just use the box as a reference rather than use the measurements provided in the instructions. I trimmed the plastic flush to the tile with a dozuki saw. I think you could use a knife for the purpose, but it'll be hard to get a nice clean cut.

My designer recommended this style, and I have been so happy with the Sumerain. The finish is a brass nickel look. The style is very modern with clean lines. As an African American woman, I did not want the rainfall shower head, but still wanted a spa feel. The pressure is sufficient for my liking. The hose is long enough to reach all of me and aids in shower cleaning. Everything needed for installation was included. I haven't had any leaks or water stains on the finish. 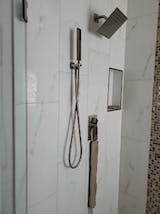 Well made , no plastic parts

The build quality is excellent. The shower head produces a water fall that feels wonderful. I would be 100% happy with this shower fixture if it was not for the zero room for error on the shower wand installation. You have to know exactly how thick your wall will be so you can install the plumbing at the correct depth. If you’re off by more than 1/8 inch it will not fit together correctly. My backer board/waterproof membrane/tile/& mortar stuck out slightly further than I expected so I had to grind down the base of the shower wand to get it to fit without leaking. No reviews
Get a perfect blend of style and functionality for your bathroom with the Sumerain Triple Handle Wall Mount Tub Faucet with Hand Shower. This tub faucet features a wide flat...
$299.00
$239.00
Add to wishlist
Add to Cart
Add to compare
Quick View

29 reviews
The sleek and simple appearance of the Sumerain shower faucet - a fresh design that will bring life to any bathroom. The ceramic disk cartridge brings you a faucet built...
$248.50
$169.00
Add to wishlist
Add to compare
Quick View 28 reviews
Bring a modern style to the nostalgic feel of your clawfoot tub with this tub faucet. Features of this stylish piece include a classic spout, metal cross handles, and victorian...
$307.98
$179.99
Add to wishlist
Add to compare
Quick View

12 reviews
The Sumerain pot filler has a stylish and flawless appearance that suits contemporary kitchen decors. It is made using brass, which ensures the pot filler faucet remains sturdy and lasts...
$359.00
$119.99
Add to wishlist
Add to compare
Quick View My Wishlist
You've just added this product to the cart: